Last weekend I decided that I was going to make a skirt. I really wanted a summer skirt and it was a long weekend so the project was perfect. I went to the fabric store and they were having a huge holiday sale and all patterns were $2. I don't know why, but I saw the pattern sale a sign that I should buy a skirt pattern instead of just designing my own. I have never followed a pattern, every time I try I get frustrated with the construction and I end up making it my way. I guess I thought this time would be different so I picked out a skirt pattern and bought the 3.5 yards of fabric the pattern said that I needed to make the skirt, even though it seemed excessive. I got home and unfolded the cut fabric and realized either the pattern was wrong or the pattern was for a giant. As usual I tossed the pattern aside and went my own route. I decided a wrap skirt was what I really wanted so I cut the pieces and sewed them together. Then once the main pieces were assembled I decided I wanted to finish the skirt with bias tape instead of seems, of course I didn't think of this at the fabric store. I decided to set the skirt aside and finish it with bias tape this weekend. I went out this morning and bought the tape along with some extra thread, just in case. I returned home and within an hour my skirt was complete-- or so I thought. I wore it out for a walk and realized I need a pocket. I had some coordinating fabric that I used for the waist leftover, but it was too plain for a pocket. I decided to embroider a little rocket on the fabric to make it more interesting, this is where things take a turn. I was using one of the iron-on transfers from Jenny Hart, but as soon as I plugged the iron in I overloaded our circuit and blew a fuse. A month ago this would be no problem, I would simply go into the basement and switch it all back on, but our building changed management at the beginning of June and they changed the lock on the basement door so my key was no good. We had to call the emergency maintenance number and some poor guy, probably in the middle of dinner with his family, had to come out and turn our power back on. Once we regained power, I ironed on the pattern and started embroidering the rocket. I saved the smoke cloud for last because I wasn't sure if I wanted it white, Philip expressed some concerns about it so I figured I could make a better decision once everything around it was complete. I finished everything and it was clear that the smoke cloud should be white so I went to grab the white embroidery floss and there was none, not even anything close. It was 1am at this point and my options were 1) drive to Wal-mart and buy some or 2) wait until the SnB on Monday and walk over to Michaels to grab some. I realized the item in question would cost about $.25 and the drive to Wal-mart (not to mention the trauma) would cost about $4 in gas, there was no way I could justify the trip. On the other hand, if I wait until Monday to get the thread, there is a good chance that this skirt would join my pile of unfinished projects that have little hope of ever being finished. After pacing my apartment for 10 minutes I got the idea to make my own embroidery floss out of the polyester sewing thread I have, if it didn't work I would be no worse off. Anyway, it took 8 strands of thread to match the thickness and it was a little frustrating to work with, but it did work and my pocket is done. Tomorrow I will sew it on and post the finished skirt, now I am going to bed. 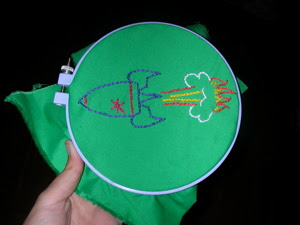 That pocket looks great! I'd love to see a finished picture of the skirt when it's done. Oh, and I'm really into that kelly green color, lately. Actually, I have a wrap skirt in that color, though I didn't make it.

You know, it's a good thing we haven't blown a fuse that requires going to the basement cause our landlord moved to Oklahoma, and the "building manager" that we have is more of a concept than an actual person! I'm glad that you got your power back in time to keep working.

Robyn, your rocket pocket looks fabulous!! You are so very creative! I can't wait to see what the finished skirt looks like! My sister, Susan brought a dress to me that she had made for my birthday present...it has fairy pockets!! I wish you could see what it looks like. I love it and am always grateful that I have such a creative sister!! love you, Sally

Aileen, my niece, makes her own embroidery floss, too!! It must run in the family!! love you, Sally P>S> still can't wait to see the finished skirt!!