These gloves aren't made for warmin'

After Sunday'’s entry about the lack of knitting content I picked up my needles and made the fingerless gloves from the Summer issue of Take Back the Knit. (For those of you who don'’t know, Jae is selling the first and second issues of TBTK along with some cookzines to raise enough money to print the next issue of TBTK so please check out her blog for more information) The pattern called for Cascade Fixation which I happened to have in my stash so I grabbed the needles and whipped out these babies in under two hours. 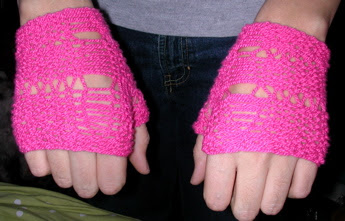 I originally bought a bunch of Fixation on clearance to make some striped socks, but after knitting a swatch I decided that I don't like the way it looks for socks. As a result, I have several balls of this yarn waiting to be used so if anyone has seen anything fun made with this stuff, please send me the links.

In other news, I have been working from home for the last three months so I haven't been listening to the iPod much and thus have fallen out of the Podcast loop. Since I started going to the gym again I need some new quality listening material. I have been listening to Knitcast since the beginning, but it seems that a ton of other crafty/knitty podcasts have popped up. Today I downloaded some episodes of Cast-on to listen to while I was working. Cast-On is a fairly new knitting Podcast that was posted to the Lexington snb list and is available as a free subscription thru iTunes. The nine episodes so far include a Halloween special, Q&A's, interviews with other knitting podcasts, lots of music, and tons of silly knitting content. It is definitely worth a listen. After downloading a few episodes I checked out the other Podcasts listed below.

Hmm, I was on her site and was thinking of buying some of those zines, particularly Take Back the Knit. How do you like it? Do I remember correctly that you're in one of them (which one?) Those hand warmers are sweet. For cascade fixation, other than socks I think I've seen a bikini (snb), bra and underwear (knitty) and a nosewarmer (also knitty). I have two balls around, for socks supposedly, but who knows when those will be made?

I wrote an article for the second TBTK which is the one I have. I really like the final product, you can tell that Jae put a ton of work into it. Hopefully, I will be posting my second project from this zine, that is if I can find my Denise needles, later this week. While you are ordering, you might want to grab Vegan Freegan. She sent me a copy and the recipes are great. I am going to place another order for the first TBTK and a few copies of ripe this weekend.

Yeah, Vegan Freegan was one of the ones I was thinking about, too. Are you freegan at all (by the way?) Cause I've been having thoughts about it, though right now, I'm not one.

You know, when I was in college, people I knew were using the word freegan (or something like it, I forget now) to mean that they were vegan, unless it was free, then it was anything goes. But they ended up being called "consumer vegans." I think I'm warming up to the idea of eating free/cheap, though vegan, stuff.

I am freegan, but not a super active one. Yesterday Philip scored some freegan M&M's which is probably the first instance in a long time. I am vegan for environmental reasons first and ethical reasons second so any waste that I can use is better for the world. Of course, I do have limits and rules which are too long for a comment. If you want to know my philiosophy, just email me and I'll explain my views.