I recently discovered that you can watch episodes of the Post Punk Kitchen online. I started with the last episode- Episode 4: Mexcellente. If you know me, you know that I am completely obsessed with the idea of vegan tamales so watching the girls whip up a batch made me crave tamales even more. I have several vegan tamale recipes, but I have been too scared to attempt the tamale making process on my own. After over a year of talking about it, I decided to conquer my fear and Philip got on board for some hard-core tamale making. Tamales are not a quick meal; they usually take several hours to prepare so they are often prepared in bulk and then frozen for later. Since our time together is very limited these days we decided to go with the freezing option so that we can enjoy tamales for weeks to come. We loosely followed the recipe from the Post Punk Kitchen, but gave it our own little twists. We made about 50 tamales, steamed 10 for dinner (warning: 10 tamales are too much for two people) and put the rest in the freezer. In the end we had about twice as much filling as we needed so we just put it in the refrigerator to use for burritos later. 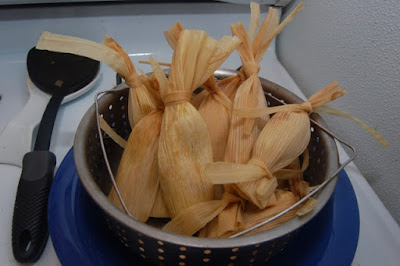 The tamales took about 1 hour and 15 minutes to steam fresh so we are guessing the frozen ones will need to steam for about 2 hours; not exactly a quick meal, but mindless. The filling was excellent, but we will probably simplify for the future batches. You could really get away with using anything with a thick chili-like consistency- we are going to try a few tomato and pepper variations over the course of the next few months. For dipping sauce we went with red salsa and salsa verde. Yummy!!
at 8:50 AM

Thanks for for this information about tamales. I'll try to make them and post about it on the Vegan and Vegetarian Forums.

hiyo. first of all, those look yummy. :D but also...just wanted to make sure you got your sp10 assignment. please email me at sphostesscecily AT gmail DOT com.