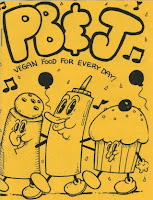 I signed up for the vegan recipe swap on Swap-bot, but the idea of sending recipes torn out of newspapers and magazines did not appeal to me. I decided instead to create a mini recipe zine for my swap partners. I have two partners for the swap and they are both getting the same thing since I am too lazy to create two zines. The quarter page zine is eight pages, contains 10 recipes and the cover art was done by Philip.

Since the swap was centered around vegan food, I also slipped in some blank recipe cards that I got from someone on Craftster and a little I heart vegans pin. Yeah swaps!!!!

On the subject of vegan cooking, I was inspired by Sarah's portabella burger entry a few days ago so I decided to make blackened portabella caps. I went to the grocery store on Friday to discover that portabella mushrooms, asparagus and roma tomatoes were on sale. These are all favorites of mine so I stocked up and for two nights in a row I had blackened portabella caps, fresh roma tomatoes, and steamed asparagus with vegan hollandaise sauce. Last nights meal also included a bed of Spanish rice making it the better of the two meals. 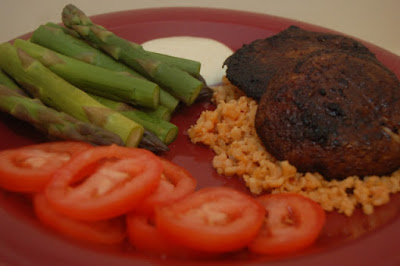 I still have one portabella cap and about half a pound of asparagus so I will probably have them for lunch tomorrow.
at 1:50 PM

Wow, Robyn, you are without question queen of swaps. That zine is awesome!

I love mushroom burgers and I would have served mine on buns if the asparagus and tomatoes weren't on sale. To prepare them I simply make an oil and vinegar(balsamic or red wine) marinade and let them soak for about 30 minutes. Then I rub on the spices (I used a cajun spice mix from the grocery) and cook under the broiler until they are almost burnt.

Mine came out almost damp in the middle. I don't think our stove works quite right, it doesn't get as hot as it should. :l

Anyways, thanks for sharing your prep routine.

robyn! it was so great to meet you yesterday! yay yay!

i wish i could sneak a peak at the inside of your zine!!!