I have actually been back from Oregon for a few days, but catching up has been quite a challenge. Luckily, I think I have things pretty much in order or at least they will be after the weekend. We had an amazing trip. Robert and Bambu's wedding wins for the best wedding we've ever attended since it came with a built-in vacation. I guess I will just start at the beginning

Tuesday night we flew from Louisville into Portland. The flights were long and fairly uneventful and we arrived in at our hotel in Oregon around 3:30am EST which was a little painful after a full day of work. The next morning we woke up way too early and headed down to Voodoo Doughnut with Philip's parents were we each bought two vegan doughnuts. I only finished one of mine since they were pretty dense and I am not used to doughnuts in the morning. 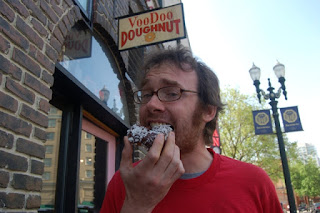 After the doughnuts, Philip's parents headed down to Eugene and Philip and I headed down the street to Stumptown coffee to wait for a decent hour to call our friend Amanda. For the rest of the day Amanda was driving us all around Portland. We visited Lint, the Naked Sheep, Herbivore, the Parodox Diner, the bins (a free-for-all Goodwill experience,) the nickle arcade, and a few comic and record shops.

Late in the afternoon we took a trip down to Mt Angel, Ore. to visit the museum at Mt Angel Abbey. Unfortunately, we arrived to a bunch of construction and this sign. 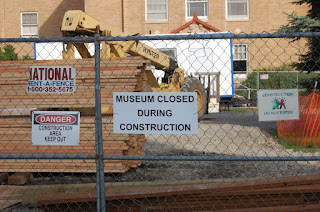 Since it took us 45 minutes to get there we decided to walk around the abbey. We visited the book shop where I bought a rosary for my sister and a few saint charms for myself. The ladies who ran the book shop told us all about the abbey and the museum and they even drew us a picture of the world's largest hairball (the attraction that originally brought us to the museum) and gave us some divine vegan chocolate to make up for our trip. 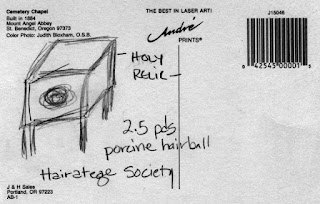 The abbey itself was very beautiful. It was situated on top of a hill and supposedly it had an incredible library, but we were a little late to see inside.

After the long trip to Mt. Angel we were all a little tired so we decided to forgo dinner at Pirate's Tavern and go to the Alibi which is a tiki bar with karaoke instead where I finally met . I have never actually met anyone I communicate with online so I was a little nervous, but Michelle was awsome and I felt totally comfortable talking to her. She came with her boyfriend Aaron and they even sang karaoke. Despite their nervousness, they rocked at karaoke. 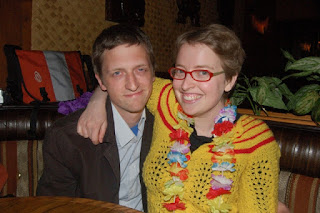 Portland was really fun, but we drove everywhere which doesn't really allow for seeing the neighborhoods. Next time we go we are going to stay longer and either walk or take the bus everywhere so we can really explore the city.

Wednesday morning we took a bus from Portland to Eugene where we met up with Philip's family and the rest of the wedding party. We spent about an hour in Eugene before it was time to load everyone up and head out toward the cabin. The cabin was located in the mountains near Drain, Ore. about 30 minutes from Eugene. We knew the cabin was going to be big, but we really underestimated the size. It was huge, more like a lodge. There was a pool, a hot tub, a pool table, a pond with a paddle boat, and no neighbors as far as the eye could see.

At this point all of the days ran together. I spent a lot of time relaxing by the pool, napping, sitting on the dock, exploring the trails by the cabin, hanging out, knitting, and eating. I can't even describe how much food I ate. Philip and I usually don't eat three full meals a day, more like a couple smaller snacky meals and then a big dinner so we were a little overwhelmed by the volume of food available at all hours of the day on our trip. Our favorite meal of the weekend was the quiche from Vegan Vittles that Bambu made the night of the wedding; it was so good!!

The wedding was Saturday evening in a clearing overlooking the other mountains. Bambu and Robert wrote their own vows and had their friend Jim perform the service. It was perfect, every aspect of the ceremony reflected them which is the key to the perfect wedding. The evening was filled with drinking, dancing, and the most amazing vegan wedding cake I have ever tasted.

The next day we were back to relaxing mode. Some of the people headed home and some went to check out the coast. The rest of us took naps, got herbal facials courtesy of Bambu, and played games.

Monday we headed to the airport with every intention of getting back to Kentucky early Tuesday morning. Unfortunately, there was a delay with our flight which completely destroyed our travel plans. We waited 9 hours to be rerouted to Atlanta on another airline getting us home about 10 hours later than planned. The one nice thing about the delay was the Powell's book store in the Portland airport. Philip and I ended up buying a pile of books to read on our trip home, none of which can be found in a typical airport book store. When we got home we picked up Astrid, then went home and slept the rest of the day away. Nice trip, but recovering from the travel time was tough. Our hours are still a little screwed up, but we should recover over the long weekend.
at 7:01 PM

Sounds like you guys had a great time. Glad all was fun and well.
Your secret pal

Glad you had a good time. If you're ever in Cali, you gotta let me know. =)

Looks like an amazing trip, I'm consumed by jealousy after seeing that cabin!

Ok that last comment was mine, LOL... computer is being an idiot today! :)

yay! i'm glad you had such a good time here and in the cabin and at the wedding!!! it was so great to finally meet you!!!! we felt really comfortable with you, too!

you know, i still can't get those songs out of my head!

As a resident of Portland, I urge you to take the bus next time! It's lots of fun, and you can get anywhere (I sure do)! Trimet.org can help you plan your trips, or you can hop on a line and see where it goes- which is also fun...