It is officially summer here which means warm weather, crazy thunderstorms, walks with Philip and Astrid to the park, and best of all- sandwiches. The other night, I sat down with four different cookbooks and planned out our meals for the next two weeks before going to the grocery store. We ended up spending $140 on groceries, but that is because we were out of several staple items. After the grocery trip, we made our first meal which was a curry soup that we haven't made in almost two years. It was delicious and left us wondering why we don't make it more often. Last night we made something completely new, the tempeh reuben from Vegan with a Vengeance. We cheated by using Nasoya Thousand Island dressing instead of making our own, but only because we had some left over from a salad night. Other than that, we followed the recipe exactly and the resulting sandwiches were amazing. 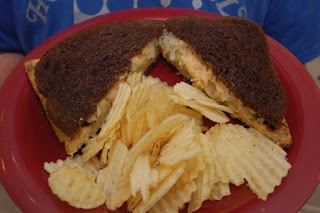 These were big sandwiches so we could only eat one each, but we have plenty of leftovers for two more sandwiches. The only thing that I would change about the recipe is I would halve the tempeh. The recipe calls for 16oz which is two packages of tempeh and we had tons leftover so to cut down the price of this recipe, you can just use one package. We will definately be making these sandwiches again and next time we will try making the thousand island dressing.

On the subject of food, I have long been struggling with the lunch away from home dilemma. Whenever I work away from my home I am at high risk for buying lunch. The problem is that I pack my mornings so full that there is never enough time for me to make a lunch before I leave the house. When I work in the office I have the temptation of vegan meals (delicious, but unhealthy) delivered three days a week. When I work at the store I have several vegan options close by (some relatively healthy, but expensive.) My goal is to come up with a series of lunches that I can assemble at work that will be filling and keep me away from restaurant food. Another requirement is that they not be those "just add water" noodle bowls or those Ives dinner bowls. I want something cheap and relatively healthy.

My first success came today in the form of a banana and peanut butter burrito. I found whole grain tortillas on sale at the grocery store last week so I bought an extra pack to leave at the store. I already had a jar of organic natural peanut butter there so yesterday I put the peanut butter on a tortilla and ate it for lunch. It wasn't bad, but it wasn't very filling. Today I brought a banana in with me and threw the slices into the burrito and it was amazing.
at 9:14 AM

That sandwich looks amazing. Something similar that I love to make is Tempeh Herb Sandwiches (http://www.vegcooking.com/recipeshow.asp?RequestID=32).

It's hard to eat well and cheaply at work! I've had success throwing hummus, pita, an onion, and a tomato in a bag before I leave in the morning and assembling a pita sandwich at lunch. Not very filling either, but having a banana or apple on the side helps. Also I've made a bunch of pita pizzas then frozen them (one of my favorites is Follow Your Heart mozzarella, spinach, and olives) and then microwave one for lunch.