I went to Virginia for two weeks for work which is why I haven't been blogging in awhile and now it's time to play catch up.

I came home to two fantastic packages. The first was a package from my Secret pal. She sent a large knitting needle case, which I am in dire need of and way too lazy to make as well as some really bright sock yarn and a box of Boston Baked Beans because she is from Boston. I am planning a secret gift with the yarn that I will reveal after the holidays. Thank you secret pal!! 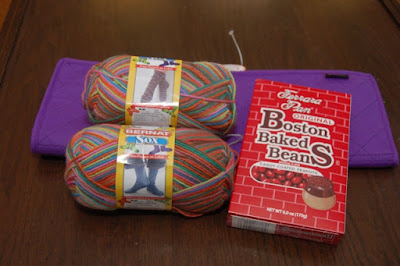 The second package was from my vegan pal. My pal was twin number 2 from Just Knitting Around and she put together an incredable package. First, there was candy- Dots, Twizzlers, and apple cider mix (okay, not really candy, but it's sweet.) Next, she sent 4 hanks of Borroco Touche in natural and brown. The natural is going to be dyed for a gift and I am going to use the brown to make a twisted rib version of calorimetry for myself. There were recipes and a little post-it pad and of course, the magic yarn ball. Inside the ball was a little pad of paper, some apple cider mix, and the cutest stitch markers (I will post a picture of the markers later.) 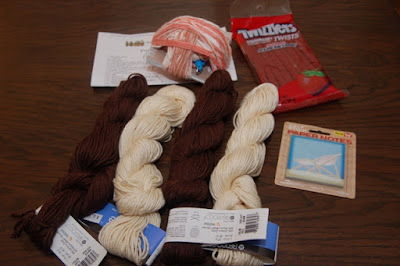 After opening my fabulous packages I spent the rest of the day with Philip celebrating his birthday. He got Guitar Hero for his birthday so we played that for most of the day, but we did manage to work in a movie, Dan in Real Life, and a dinner with his family at Oasis. It was a great day.
at 8:31 AM