I don't even know where to start with Christmas, everything was so fabulous. I guess I will just start with the first Christmas and go from there. Thursday night Philip's parents had my dad, my sister and her husband over for a family dinner. It was really lovely and since I could eat normal food at that time, really delicious. They exchanged presents, but not with us since we had Christmas with both groups scheduled for another time.

I took the Handmade Holiday pledge this year where I tried to make or buy handmade for all of my gifts this year. There were a few exceptions in my holiday gifts, but I managed to buy all of those from local small businesses making this the most socially responsible Christmas yet (I didn't buy one thing that was made in China.) Compared to previous years I made fewer of my gifts, but I did have a lot of fun searching etsy for the perfect gifts. I did a lot of special ordering (my favorite thing about etsy is how willing people are to make you exactly what you want.) I originally planned on doing a little trading, but with all of the chaos in my life just before the holidays it seemed better to just buy.

Sunday we did Christmas with Philip's family. We were supposed to go out to dinner, but since Philip and I both had pretty long days at work and since I had to work the following morning we convinced them to order a pizza (soy cheese for Philip and I) and just eat at their house which I think was way nicer and more relaxed than going out. I made his dad some clogs, I made his mom a new hat a scarf set (since I notice the scarf I made her several years ago was looking pretty worn,) and I made them both a set of dish towels to compliment their kitchen. For his grandmother I was going to make an aran tam, but time was getting short so we bought her a really cool handmade bracelet that we packaged in a painted gourd box. Philip bought gifts for his parents that were mostly handmade which was really nice. We ended up leaving his parents' house with a ton of stuff including several items from my store wishlist (hand dyed fiber and yarn, an Ex Libris Knit and Destroy journal, and a Lantern moon cake tape measure,) a France Gall album, a pair of super cute Mary Janes, and a copy of Veganomicon so there will be some cooking posts in the coming weeks. We also received a gift card to Banana Leaf which if we play it right will pay for two meals.

On Christmas Eve we did Christmas with my dad, my sister Tracy and her husband Greg over at Tracy's house. Tracy made us a fabulous dinner and vegan crepes for dessert (very nice!) We exchanged gifts. We all went in together to buy my dad some clothes (since evidently he won't do his own clothes shopping;)) and then Philip and I got Greg some passes to the Kentucky Theater and we got my sister the body stockings she wanted as well as a handmade rosary that I bought for her in Oregon and a pair of handmade earrings that we an impulse buy at a local store. 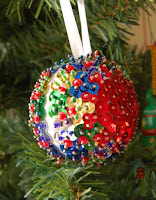 My sister made almost everyone on her Christmas list handmade ornaments. This is something that my grandmother (who died when I was three and Tracy was one) used to do during the holidays and so Tracy decided to take over the tradition. The ornaments that she makes are very ornate and time intensive, but they are something that will last a lifetime and can be passed down from generation to generation. She made my ornament with lots of colors to resemble a patchwork quilt and it came out amazing; I didn't see all of the ornaments, but I am willing to bet that mine was the best. We ended up getting 4000 Wii points and another Wii controller (which would be #3 so we are going to exchange it for something more practical.)

Yesterday Philip worked so our Christmas celebration didn't start until around 4pm which meant I got to sleep in (hurray for sleep) and make a quick trip over to my Uncle's house with my dad and sister. When Philip got home we started by opening presents, Philip wins this year for best gifts. Not only did he get me the boots, but he got me seven pairs of brightly colored knee socks, Paul Frank days of the week underwear (yes, socks and underwear- we are officially and old married couple,) a super cute girly tee, and an amazing hoodie. After we opened presents we spent some quality time with the Wii. My dad and my sister gave us 4000 Wii points to use on classic Nintendo games and since we haven't had Wii points since the summer we had to browse the catalog which had way more games than our last visit. We added Super Mario 3, Golden Axe, and the new check Mii out channel which is completely addictive. After playing on the Wii for a few hours we made dinner which was actually breakfast. We had vegan eggs benedict, roasted red potatoes, and a grilled portabella salad, yummy. We ate dinner while watching John Waters: This Filthy World and the Flaming Lips UFOs at the Zoo. It was a very low-key Christmas, but it was really great.
at 6:24 PM