I finished the adult Guimauve hat over a week ago, but was too lazy to actually photograph and post it. I am still thinking about overdyeing the hat with some red dye so that the colors better suit my complexion, but Philip thinks these are good colors for me. What do you think? Leave a comment and let me know if you think it would be better in deep reds and browns. 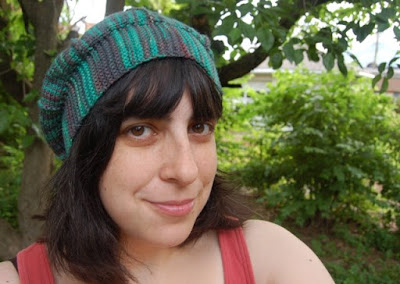 In other news, Sarah and I drove up to Columbus for TNNA on Sunday. Due to problems with both of our schedules we only had one day to get through the show (last year we barely made it through in two.) Sarah mapped out all of the vendors that we had to see and wrote down the orders we needed to make so that we wouldn't get too far off track. Even though we mostly stuck to our plan, we did manage to see a few unexpected new things at the show and we added three new big lines for the Fall (and are considering a few others.) We also have places in two limited sock clubs starting next month. The show was a lot of fun, but also very tiring. We made it all the way through, spent thousands of dollars, and only forgot to see two vendors so that is pretty good. After the show we headed over to Wholly Craft so that Sarah good drop some stuff off and so that we could do some shopping for local handmade goodies. I made it out with an Octopus t-shirt, octopus necklace, a zine, some hand blended fiber, and a few other goodies.
at 6:25 PM

Woo, I'm excited about new stuff for the shop. :)

I think I really like the colors of the hat, but I am not certain they are good for you. At least in that picture, they look pretty cool toned and you'd benefit from slightly warmer colors I think.

The hat colors are lovely, and I think you could wear it as-is, but I think it would look awesome overdyed. So do it and show us the results!

And yay for new shop stuff! Can't wait to see it.