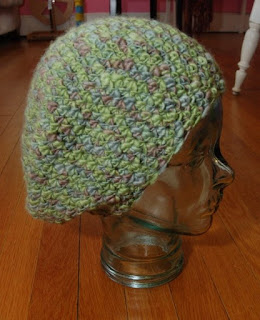 I made another tam, shock of all shocks. This one was a special order from a customer who picked the yarn and size. I was asked about my pattern, but in 10+ years of making tams and dready hats, I have never used a pattern, only a sort of template I came up with in college. Using any size yarn and hook, I start with a ring of twelve crochet stitches, whatever stitch I am feeling in the mood for, then I increase 12 every round until it is about dinner plate size (give or take depending on the head and hair size.) Then, I crochet plain for 1-8" (yet again, depending on the head and hair size) and finally I start the decreases, usually decreasing 15-20% each round. The last two rounds are sometimes crocheted plain with a smaller hook and smaller stitch to give the bottom strength and sometimes they have a drawstring. I have made hundreds of these hats (seriously, they funded my summer travels in college) and I doubt that I have ever used the same pattern twice, I like to just let it flow and see what happens. That is what I have as far as a pattern goes, but if you want something more structured, there is a great book called Get Your Crochet On! Hip Hats and Cool Caps

by Afya Iboma that I recommend to people who come in the store and want to learn to crochet tams and caps. The book has excellent patterns and instructions, my only complaint is that she is highly reliant on Red Heart Super Saver and instead of weaving in the ends she likes to glue them with fabric glue (boo hiss.)

Now on to some knitting. I joined Team Angstylvania for the Ravelympics. If you remember, this is the same team I "competed" in the Knitting Olympics with in 2006 so it just seemed right to continue in the fine Anstylvanian tradition. Since my team's government likes to blur the rules and since I have so much knitting time right now, I decided to start competing early this year. I started the Hemlock Ring on August 2 and my goal is to finish it by August 18. I am actually planning on finishing the knitting by the 15th and then spend two days binding off (568 stitches in a picot bind off, yikes) and one day blocking. Anyway, here is my progress so far. 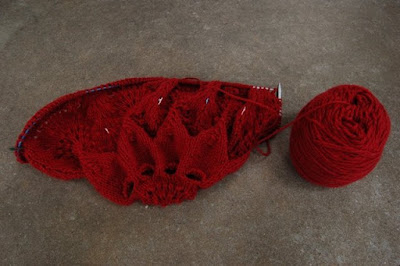 Now onto the new apartment. We are still unpacking, but the end it in sight. We still have too much stuff so we are purging more stuff as we unpack the boxes. I love this neighborhood. Every morning I take Astrid on a long walk and we explore the little side streets and the high school campus. School starts next week so I worry a little that it won't be as quiet around here in the mornings, but we'll see. I am totally getting the hang of the bus thing now and I am really loving it. My commute to the store is actually shorter now than it was when I lived downtown. I just hope the bus gods don't go and change the routes on me.
at 8:05 AM

Yea, the bind off on the Hemlock Ring took _for_ever_. I was so happy when it was done. Good luck on finishing! I look forward to seeing your new place next time I visit (Rockband!!)

Such a cute tam! Where did you buy your glass head? I've been looking for something just like that!