It's Wednesday which seems like the perfect time to do a weekend recap. The weekend started pretty slow with me working at the store and Philip working at the hospital on Saturday. Saturday night we went out to Gumbo Ya-yas with his family and his aunt and cousin who were visiting from Canada. I think originally his mom wanted us to go see the new Death Race movie afterwards, but since Death Race 2000

is one of our favorite movies we refused to go and see so crappy action director remake it. From what I can tell from the previews, the new version doesn't have the same message, just a lot of action. Instead we brought the Death Race 2000 dvd with us to watch at his parents' house after dinner. I was a little surprised that no one had seen it before, but everyone seemed to enjoy it.

Sunday I had the day off from the shop while Philip had to work at the hospital so I was determined to fill my day with fun solo activities. I started in the morning by finishing up some work stuff that I had been procrastinating about. Then, I met Sonya down at Third Street Stuff where she teaches a hooping class from 10-11am on Sundays. I gave her the last five hula hoops from my gypsy days (I kept the two I still use) and I stayed for the class. OMG, that class is so fun!! She teaches it in the lot of Third Street Stuff so there is lots of space to practice. We went over a bunch of techniques and practiced moving the hoops up and down our bodies. The really interesting thing about hula hooping is that it requires a different set of movements for every body part which makes transitioning from one part to another a little tricky. After the class, Philip met me inside for lunch and we made plans for the evening.

I walked around downtown for a bit and then decided to go home and try to get some stuff done so I would be free to have fun when Philip got home. I did the dishes, straightened up and took out the trash and recyclables.

Then I was bored with cleaning so I decided to take the grapes I picked at my dad's and make grape juice. The original plan was to make jelly, but I don't love grape jelly and the idea of making 6-8 pints of it doesn't thrill me. Sarah mentioned

that fresh grape juice is the best grape juice in the world and since I have several pounds of grapes, that seemed like a plan. For those wondering, the process of grape juice making is a little more complicated than just squeezing some grapes. What you do is you mash a bunch of grapes (1lb of grapes for every 8oz of juice you want) in a large stockpot. Then, you cover with water and bring to a boil. Once the mixture is boiling, reduce it to medium heat and simmer for 10 minutes. Finally, you need to remove the skins and seeds with a foodmill, strainer, or cheesecloth. I borrowed a foodmill from my dad. Sent the grape through it and then again through a strainer. The process was laborious, messy and only ended up yielding about a quart of grape juice. I spent about 30 minutes cleaning up the grape juice mess and then took a nap with Philip.

After the nap, I made shepherd's pie for dinner and we got ready to meet some friends at Marika's. Unfortunately, Marika's is closed on Sundays so it was Rock Band and beer with friends at our place instead.

Monday was mine and Philip's anniversary. We were both off work thanks to the holiday so Philip planned a whole day of activities for us to celebrate our day. The plan was to sleep in, but Philip woke up around 9am. He started getting really snuggly so I knew our plan to sleep in was out the door. After a bit we got up, got showered and dressed and hit the co-op for breakfast. Unfortunately, the co-op was closed for Labor Day so we went to plan b which was Dennys. Breakfast was great and very filling. After breakfast we headed over to Michael's to pick up some paints and a canvas for our anniversary project- a painting that we would do together. We found a pre-stretched canvas (we didn't want to spend half our day stretching and gessoing a canvas) and a few tubes of paints. We got home and Philip put the sketch onto the canvas, put in some music, and we started painting. 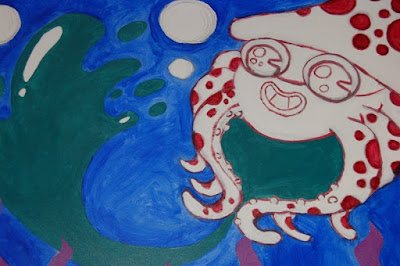 We painted for a few hours and I showed Philip a few of my hula hoop moves and then we were starting to get tired so we decided to take a nap until it was time to leave for the movie. We saw the Pineapple Express which was really funny and then we headed over to PF Changs for dinner. We split an appetizer, our two favorite entrees (Singapore Street Noodles and Chinese Chicken salad both made with the five spice tofu instead of meat) and a dessert (the banana spring rolls.) Then we went home and tried to finish a crossword puzzle together (we failed, but just barely) and went to sleep. It was the perfect day and probably our best anniversary yet!!

Tonight we are going to work a little more on the painting. As you can see, we have quite a bit left to do. My hope is that if we work on it for a couple of hours a night we might be done by next week. Depending on how the final colors come out, this will either go in the living room or in the studio.
at 8:06 AM

we were riding down clays mill last weekend and james goes, "what the hell is that lady doing with 15 hula hoops!?"

and james was like, "alright, but why does she have 15 hula hoops?" i had to think for a minute... i realized that i totally thought it being you made enough sense as an explanation.

Well, it sounds like you are having a great week and a wonderful anniversary. And I enjoyed the code "snuggly." Subtle.