Wow, what is it with September? There is so much going on this month I have no idea when we are going to get a chance to sit down and catch our breaths. Friday night we went out to Mellow Mushroom for our friend Patrick's birthday. It was really fun, but crazy hot so as soon as the check was settled Philip and I split. We went over to our friend Shaun's house to help him out with some cleaning. He had a girl friend coming to visit him for the weekend and he wanted to impress her. When we got there he had a small cleaning crew cleaning and organizing his stuff. Philip and I noticed that the walls were bare and he was missing a few things that most girls would notice (things like hand soap and towels in the bathroom) so we made a quick trip to our house, grabbed a few paintings for his walls, a hammer and nails, some soap, a set of matching towels, a scented candle, and a few other things that would make his apartment a little homier. We rushed back to his place, hung the paintings and put the other stuff into place and then we all cleared out so that it looked like Shaun was just spending a quiet night at home waiting for her arrival.

After redecorating Shaun's place we went back home and got into our pajamas and Philip set up Rock Band. I noticed a message on my phone (which I left at home for the night) from Chris saying she, boy Chris, Zabet and Patrick decided to go to Marikka's to have a drink before calling it a night, perfect timing since Philip and I weren't ready to call it a night. I called back to see if they were still thee, which they were, and then Philip and I jumped out of our pj's and back into normal clothes and headed over to the bar. We stayed at Marikka's for a couple of hours and then Philip and Patrick decided they wanted to play Rock Band so we all headed back to the house and "rocked out" for the rest of the night.

Yesterday morning I could barely peel myself out of bed, but since Sarah had to go to Cincinnati for a false alarm and didn't get any sleep I had to get cleaned up and into the shop by 10am (more like 10:15 when I got there, but no one seemed to notice.) Philip came around 4pm to pick me up and we headed to the liquor barn to get some beer for the last minute cookout we planned for last night. We went home and while Philip prepared the grill I made about a million shish kabobs from the CSA produce we got this week. I also made the wheat meat that would become our ribz using the recipe from the Fat Free Vegan Blog and I was really happy with the results. 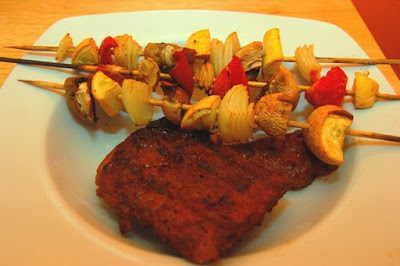 I made a triple batch to accommodate all of our guests and ended up with some leftovers (though I am pretty sure that Philip and I will be able to handle them.) The actual prep time for these ribs is less than five minutes and I figured that the ingredients for one batch cost under $1.50 so they are definitely worth trying. If you do decide to make these, don't cook them on the hottest part of the grill because they will char and harden. Also, you want to flip them twice adding extra barbecue sauce in between to get the riblet effect. We all ate and played Rock Band until the wee hours.

This morning Philip and I planned to Third Street Stuff and do the hooping and coffee thing, but we were too tired to get there in time so we decided to do co-op brunch instead. After brunch we laid in bed for a bit in our food comas which is where I would have liked to stay, but I have to work in the shop at noon. Hopefully there will be a decent snb today so I can relax and knit a bit. I am still jealous of Philip who's plans for the day consist of taking a bath with some butter beans and planning a game for Friday. We don't have any plans for tonight so I think that we are just going to grill up all of the leftovers and relax on the porch.
at 12:48 PM

That all sounds like so much fun. Even going to work. I miss the Mellow mushroom and cheap beer and entertainment.

I might have to look in to buying this rockband that you speak of.

I'm excited for Rock Band 2 since the roomies keep babbling on about it.