Things have been pretty slow around here. We got Fable 2 last Friday so there has been a lot of video game time at the Casa de la Castlen. On the other hand, we have been staying at home so we have had some really good meals including awesome vegan meatball subs.

Last night for dinner I decided to try something a little different. Joanna at Yellow Rose Recipes posted this recipe for Chicken-style seitan cutlets a bit ago and I have been meaning to try it. We were running low on vital wheat gluten so I halved the recipe which made 10 cutlets. I took three of the cutlets, cut them into strips and used them in the tempeh buffalo wingz recipe (there is a mysterious tempeh monster in our house who keeps eating all of the tempeh raw out of the package so we didn't have enough tempeh for this recipe.) I think that this is the best vegan hot wing recipe out there, whether you use tempeh, tvp, store-bought analogs, or seitan. We loved the way it came out using the chicken-style cutlets. 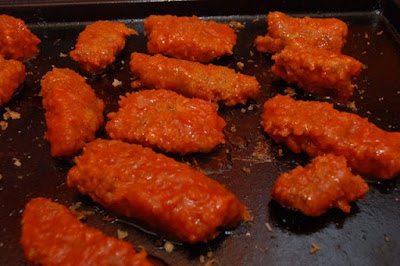 Now for the recipe disclaimer. The first time I made these wings I followed the recipe exactly and I found that the buffalo wing sauce was too sweet and not spicey enough. It took a few tries, but I found that using 1-2 teaspoons of brown sugar instead of the agave nectar rounds out the flavor and cuts some of the sweetness. I also double the amount of hot sauce. This might not be necessary if you are using a high quality hot sauce, but we use Frank's Hot Sauce for this and you definitely need extra.

We have seven of these cutlets hanging out in the fridge so I think the next thing I try will be marinating and grilling a few of them. I also saw a few people who got good results breading and frying them so that is another possibility.

In completely unrelated news, I balanced our bank account this morning to see how we did with my first month of self-employment and even though we went out to eat a few too many times and had a few extra expenditures that I am not proud of, we stayed within our budget, actually a wee bit under budget. Ultimately, my goal is for us to stay $300 under budget so that we can continue to save, but that is going to take a little bit of practice.
at 4:41 PM

i'll have to try that recipe out on the leon. he really misses chicken wings.

Good idea on the savings. I've been trying to get my financial center back since I changed jobs. Problem: new baby on the way. i'm still in the "awwww isnt that so cuuuute???"

Those look good and I'm not even interested in meat substitutes. Although I have thought about going gluten free to see if that helps my digestion, however that is almost impossible with the limited amount of items that get delivered here. I am happy about the CSF box we get every week. At least its something.