This was a really nice weekend. Philip was off work on Saturday so we decided to do brunch at the co-op since I didn't have to be at the shop until 2pm. After brunch we puttered around the house a bit and then I went into the store for a few hours. After work, we decided to stick with the brunch theme and make vegan eggs Benedict since we grabbed some Yves Canadian Bacon before we left the co-op in the morning. This is one of Philip's favorite dishes and we hadn't made it in quite some time so it was the perfect dinner option. 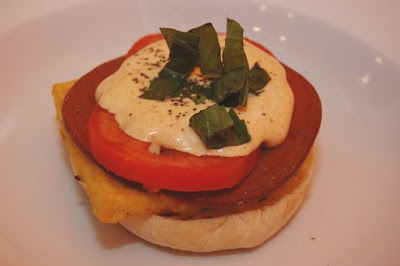 The recipe we use is the first draft of the recipe found here. I am not sure what kind of changes were made in the final version, but I am sure there are only minor differences. We actually just use the eggs and bacon part of this recipe and we use Robin Robertson's hollandaise sauce from Vegan Planet

(though we have made the vegcooking hollandaise and it is fabulous, it is just a little too time consuming for us.) We added some sliced Roma tomatoes and basil to the top for a little extra color and flavor. I should also mention that we don't use biscuit cutters on the tofu. It definitely looks nicer with the tofu in rounds and we would do it if we were serving it to someone, but it was just us and we didn't want to waste the tofu.

After we made dinner we played Fable for a few hours which we are both totally addicted to now. I went to bed early and Philip figured out how to talk to people on xbox live so he stayed up late chatting with Robert on the headset. I woke up early the next morning and after walking Astrid I decided to play Fabel for a little while until Philip woke up. Evidently, Philip can't sleep if he thinks there is any video game play going on in the house so even though he had only slept for four hours, he draged his pillow and blanket into the livingroom and plopped down on the couch with his head in my lap so he could watch me play.

Now for the scary story of the weekend... On Friday Philip and I went to a Halloween party. It was a last minute decision so we had to throw together costumes. I put together a super lame pirate costume, but since Philip was working on a side project for the host he didn't have time to put a costume together so he went sans costume. On the car ride there, he picked up some Miller High Life and we decided that he could just say he was Joe Six-pack. All night Philip told people at this party that he was Joe Six-pack and not one person in attendance got it. This was a group of probably 25-30 adults with the average age around 26 and not one of them knew who Joe Sixpack was. Even more amazingly, one person came dressed up as Sydney Greenstreet and everytime a person asked him who he was everyone at the party would start heckling them. I am now convinced that there is no hope for America.
at 8:42 AM

Maybe I would have received more attention if I wore a fez.

I liked your eggs benedict vegan style. But you know what, some real bacon (not that fake canadian ham stuff) would have made them AWESOME, but not vegan. There's a trade off.

Being vegan, do you eat honey?

Bacon also wouldn't make it eggs Benedict. I think it would then fall into the McDonald's breakfast food realm.

I don't eat honey, though not because of insect feelings (proving or disproving a central nervous system here is ridiculously complicated.) There is a real problem with the over demand of honey causing a strain on the honeybee population in this country. There are people taking measures to create new habitats to encourage a rise in the population, but as long as we are using too much honey it won't get better. There was an article just a couple of months ago in Business Lexington about the problem in Kentucky so until honeybee populations begin to stabilize I won't even consider honey. Instead I use Agave nectar which is totally natural and tastes awesome.

this is awesome. I don't eat eggs and it kills me every time someone says, only it's only egg. (shakes head)