Last week I posted about making the chicken-style seitan cutlets and using them to make a batch of hot wings. We had seven large cutlets left after the hot wing experiment as well as a few hoogie buns from a meatball sub experiment so I decided to try a little pan frying. For this recipe I simply mixed a little flour, nutritional yeast, salt, pepper, granulated garlic, and cajun seasoning in a bowl and coated two cutlets with the mixture. Then I pan fried them over medium heat for about five minutes, or until they were brown and a little crispy. I served them on hoagie buns with Veganaise, Roma tomatoes, and the fridge pickles that I made when it was cucumber season. 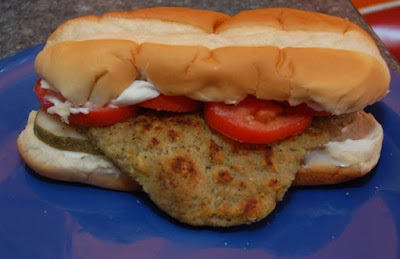 The verdict: Although the cutlets were a little big for the buns, the flavor and texture were amazing. Since this experiment we have almost used up all of the cutlets for sandwiches.

In election news, after talking to my dad on the phone this morning I am incredibly optimistic about this election. My dad rocks!!!
at 1:09 PM

Thanks for the kick in the butt to get these going! I had them when Joanna made the chicken salad she mentions in the recipe and they were soooo good! I'm halway through the recipe right now.