Tomorrow is International Yarn Bombing Day so to celebrate I decided to create an interactive installation that will be placed downtown in the morning. As usual, I took on way more than I can handle, but luckily members of the local knit graffiti group, the Tree Sweater Gang, volunteered to help me out by making the flowers. Since I only allowed myself a week to work on the project it is about a fifth of the size I had planned, about 100ft instead of 500ft, but I think it will still give the same visual effect and it will take less time to install (which is a huge plus considering where I plan to install it.) Here's a peek at the project as it comes together. I am still not putting all of the details out until it's up because I don't want to spoil the surprise. 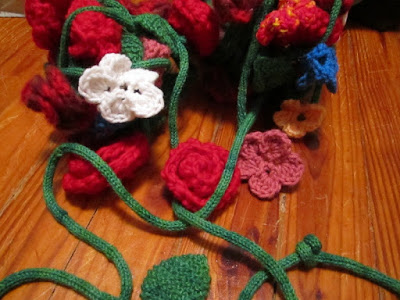 On a side note, I will be out of town all weekend so I will post days 11 & 12 on Monday. I actually have no plans for what I am going to create during those days which will be filled by looking at others creations at the TNNA summer show so I guess it will be a surprise for both of us.
at 9:48 PM