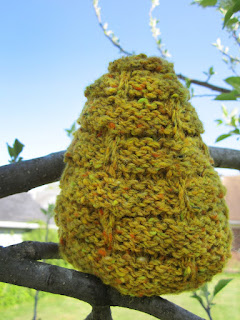 Every year the Lexington Public Library chooses a book for the community to read together. This year's title is A Walk in the Woods by Bill Bryson. My department created a woodsy display to promote the book that included a big black bear. For some reason, possibly because of all the Winnie the Pooh books I read as a child, I can't picture a bear without honey so I made this beehive plushie for our black bear to rob (though he might be a little disappointed to find it full of fiberfill instead of honey.) I made up the pattern as I went, but I made sure to write it down so I could share. Enjoy!!

Materials:
Yarn: Plymouth Tweed or any worsted
Needles: 1 set US6 dpns or size needed to obtain gauge
Notions: fiberfill for stuffing and tapestry needle for weaving in ends.

I've been looking for bee related items to make for our Summer Solstice celebration and this is just perfect! Thanks for sharing the pattern!