This weekend Philip's parents came to visit and we had several adventures. First, we went to the strawberry festival in the Pungo ("a cross between putt-putt and bingo" -Philip) section of Virginia Beach. Pungo is really weird, most of Virginia Beach is strip malls and chain stores, but go out to Pungo and all of a sudden you are in the country. All of the roads into the strawberry fest were one lane each way so we ended up sitting in traffic for over an hour. The weirdest part was the swampland that surrounded us. One minute we were surrounded by strip malls, the next minute we were in the country and the next we were in a bog. 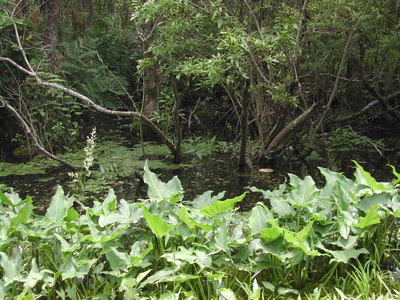 For the most part the Strawberry festival sucked, it was more like a state fair than a festival and most of the vendors seemed to be those people who travel around the country selling various things that you don't need. Considering it was a strawberry festival, there were very few strawberries. We didn't stay long, but we left with a ton of strawberries that became strawberry shortcake and strawberry daquaries.

On Sunday we ventured to Hampton for some Ethiopian food at Bahir Dar. It was incredible; Philip and I have already planned multiple trips there in the next few months including one next weekend for the Blackbeard festival.

I don't have any knitting news and the only gardening news I have is that one of my stevia plants is dying. More good stuff to come.
at 9:02 PM

Even though the festival was so-so, you sound like you had a berry nice weekend. Ok, yah, I'm a dork! :p
Bahir Dar sounds awesome!

Yeah, the weekend was great and the strawberries made the hassle of the festival worthwhile. There are tons of strawberry and blueberry fields in Pungo where you can pick your own berries so we are going to head out there again when there is no festival to get more strawberries.

hey, robyn! your bog photo turned out really nice on your blog page!! the strawberry festival was worth it for all the good berries!!....not to mention the delish homemade rootbeer!! love you, sally

Yeah, I forgot to write about the killer rootbeer that came in the tin mug. I took my mug to 7-11 yesterday and filled it with cold IBC rootbeer for $.79. It wasn't as good as the rootbeer at the festival, but still very refreshing. We looked for the rootbeer venders at the pirate festival, but they weren't there. If we see them again we'll grab you guys another mug.