Today was a day of firsts

My dad called me this afternoon to see if I was going to be around for awhile. He had previously offered to put a new lock on our garage door so I assumed that was why he wanted to stop by. He pulled into the driveway and Philip runs into the house to tell me he has this loaded into the trailer of his truck. 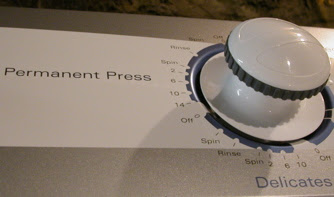 Okay so the picture is just the knob, but you get the idea. My dad brought us a brand new washing machine to go with our barely used dryer. For the first time in our adult lives we can do our laundry at home. This mean no more Saturday mornings sitting at the laundromat, no more trying to find enough change to dry the last load, no more lugging all of our clothes, towels, etc. to the laundromat. Now all we have to do is walk down the stairs and throw our clothes into the machine. Another huge plus is if I buy new fabric I can use it almost immediately. I am in heaven.

My other first for the day is tied in with the new washing machine. It ends up we are out of laundry detergent so I couldn't try out the machine right away. We use Method detergent which is sold at Target (you can get it other places, but I am not sure where.) Since we live downtown in the land of no Targets I needed to get out to a strip mall where I would find a Target. I haven't driven since I arrived in town so I decided to see how far I could take it. I have never had much luck with bus systems. I can handle subways, but I never really got the hang of buses. When I was a teenager my friend Sarah and I had a bus day where we were going to ride the bus all day. We never got where we were going and we ended up using all of our cash trying to get there. In the end we were stranded in a shopping center and we had to call our parents to rescue us. After that I have pretty much avoided the bus system, until today. The transit station is less than half a mile from our apartment so I decided that would be the best place for me to catch the bus since every bus route begins and ends at the transit station. My trip was a success, I went to Michael's and Target and caught the bus back to my apartment. I even had the bus driver point out the stops for me so that next time I can take the stops closer to my destination and I will also be able to catch the bus 3 blocks from my place instead of going all the way to the station. I did get some knitting done on the bus which was pretty cool. I think I might try to bus it to the co-op tomorrow night, maybe I'll finish the first leg.
at 9:53 PM

A washing machine is heaven! You are so lucky! Really, I dream about having enough space to have a washing machine one day. I hate hate the laundromat by our apt. and I often go out of my way to go to a different one. Excellent on the bus system, too. I take the subway way more than the bus, too, but sometimes the bus can be exciting so I know exactly what you mean.

That's awesome, a new washer...awww, I can remember the day (just 2 years ago) we were blessed with a fabulous washer and dryer. I must have washed everything in sight...just for sake of using the "new washer":o)

i have a wee bit of a method addiction. it's not a problem. really. i don't coordinate scents at all. and i certainly don't panic when i'm out of the stuff. and i'm quite sure that i don't subscribe to their email list. i am not, nor have i ever been, a member of the people against dirty army.