OMG, I have so much new stuff I don't even know where to start. Here is a picture of some of our loot. 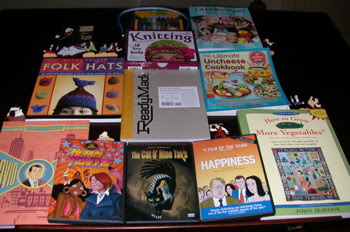 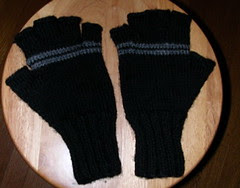 I got Philip a drafting table and stool so he finally has a place where he can sit down and draw. I also finished the cigar gloves from knitty. After about a thousand frogging sessions I decided to make them completely fingerless which was for the better since Philip decided he preferred them that way. We received lots of new DVD's including Happiness, Simpson's season 7 and Heavy Traffic. I also got the Readymade book, David Boring, a book of really crazy hat patterns, and a stocking full of stuff to make a pirate shadow box.

My sister really went over the top with her Christmas shopping; she seemed to get everyone the perfect gift. She bought Philip the entire Left Behind series. She searched the local used bookstores until she found all 12 of the books, very impressive. She also got me a knitting pattern a day calendar and a gift certificate to Stone's Throw where I can take spinning classes.

Today we continued to add to our booty. We went out this morning to look for the LED Christmas lights that I read about in the first issue of Green Light magazine. It seems that they aren't very popular yet which made them really hard to find and when we did find them they only had white. On the plus side they were on clearance for $5 a pack, about 1/3 of the online price, so we bought 3 packs. We also bought 2 bamboo plants, 2 basil plants, and 2 cilantro plants all on sale. We looked at some cacti, but decided to do a little research before buying them since we don't really know how to care for them. I was going to buy some dirt to transplant a few of my aloe babies (yes, my aloe plant is still reproducing like crazy), but the garden section was closed off today so no dirt for me.

After all of that shopping Philip and I watched several Simpson episodes and made one last cheesecake for dinner with my mom tomorrow. To mix things up, I made a blueberry New York style cake with a gingersnap crust. After making cheesecakes for presents and dinners I am through. We still have two pieces in our refrigerator from dinner the other night that will probably never get eaten unless some unsuspecting soul drops by.
at 10:01 PM

i got my honey that Readymade book too. I love it myself, and can't wait to start some of the projects. Looks like Santa was good to you too! So many books!

I know, it is going to take me awhile to get through all of this reading and the projects contained within. I am staring with the gardening book so I can plan out my garden and start sprouting my plants. I am also planing on making that plant board from the Readymade book to put in my kitchen.

LED lights are EVERY WHERE up here!! White is the one colour that is hard to find - I'd be happy to look and see what I could find for you if you are interested?! PM me!

Just for reference: The gift certificate to Stone's Throw was from Robyn's father. Also the Left Behind series was from both myself and our father.