When Philip and I moved we decided to leave behind our CD shelf since we reached its maximum capacity a few years ago and it was about to collapse due to the weight. We have been looking for a new shelving system for a few years now, but nothing is large enough to fit our needs. About a month ago, we decide to build our own shelf in one of the spare closets. We have been putting this task off since building a shelf that large seems a little overwhelming and expensive. All of this changed on Saturday when I noticed a bunch of cinder blocks under the stairs in the basement. 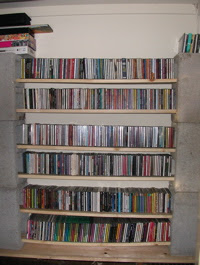 I quickly planned out a super easy shelving system. All we had to do is buy the boards for the shelves and we could place them in the holes of the blocks, no tools required. We bought the wood for six shelves for just under $12 and had the whole thing assembled in under 10 minutes. The piece of wood on the bottom that keeps the blocks from scraping the floor and distributes the weight more evenly was found in the garage. Each shelf holds over 90 CD's and there is enough room to add two more shelves which we will have to add soon since everything doesn't quite fit.

After we put the shelf together we alphabetized the CD's and did a major CD purge. It still wasn't enough to make everything fit, but we came pretty close. Here is Philip sorting the albums. 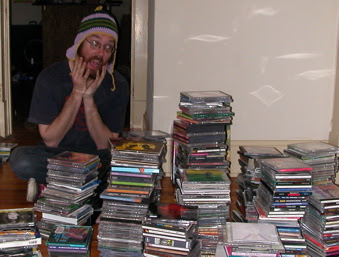 Good Gawd...I thought my step dad's collection was large! I need to send you my iPod instead of dad (to download:o)jk.

Hey, maybe you can paint your new shelf, so it'll match your decor.

We actually have iPods, but we still keep our cd's for home listening. In addition to our large CD collection we also have a couple hundred record albums that are in another closet in that room.

We talked about painting the blocks and the shelves, but since they are in a closet it seems like a fruitless effort. If we move somewhere where the shelf is out in the open we will definately paint it, but for now we will probably leave it as is.

That's a really great shelf. I don't have nearly as many CDS as you (though I have quite a lot), but books, those are a problem!