For those of you who missed it, the Peace Fair was a lot of fun. Since this is the first year, it was relatively small, but despite that we did more business than the two days we worked at Mayfest which was huge. There weren't a lot of vendors, but there were some hidden treasures. There was a guy who had about 30 shirts laying out on one of the walls. All of the shirts were from area thrift stores and he created designs on them by doing a reverse stencil and spraying them with a bleach mixture. He had some really cool designs and he was selling them two for $12 so Philip and I both bought one. 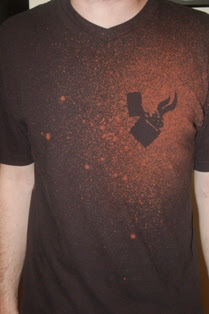 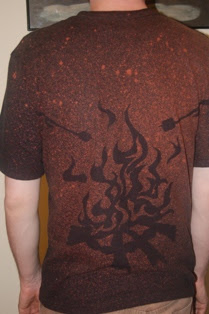 This is the shirt that Philip got and it is my favorite one he had. In case you can't tell there is a lighter on the front and a campfire with marshmallows on the back. 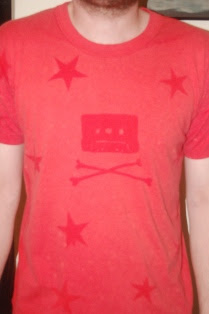 This is the shirt that I ended up getting and a close second for my favorite design. The front has a tape and cross bones surrounded by lots of stars and the back just has stars. He had other shirts in this design with the phrase "kill corporate music" on the back which were also pretty cool.

Speaking of cool shirts, I saw a girl with a really cute t-shirt with an embroidered leaf (think Jenny Hart, not grandma) and the words "me alone." It was super cute and just as I got ready to ask her if she made it herself, she turned around to reveal the American Eagle logo. Too bad, it was a great shirt. 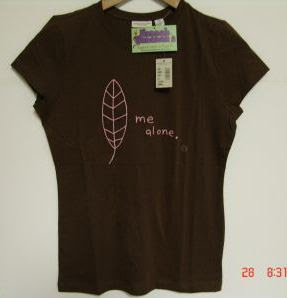 After an extensive internet search for the shirt I discovered that the shirt has been discontinued, but I did find this picture from an ebay auction. I am considering stealing the idea and creating my own sweatshop-free version of the tee.
at 9:34 PM

i can't see any of the photos and it's driving me batty! i wish i had gone to the fair. i just didn't feel like lugging the chilluns.

I am not sure what the problem was, but I moved the images from blogger so hopefully you can see them now.

I can! Too fun! Have you seen all that freezer paper stuff going around? http://angrychicken.typepad.com/angry_chicken/2006/03/little_elf_shir.html