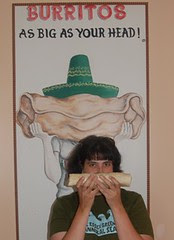 I spent the majority of the day today flying to Virginia so I can work in the office for the next two weeks. Before boarding the plane, we stopped off at LaBamba in Louisville where they promise “burritos the size of your head.” While they were not quite the size of our heads, they were definitely large enough to make the claim. I ordered the bean and avacado burrito and I am pretty sure that I won't need to eat for at least a few days.

The flying went pretty smoothly. It has been a few years since I flew Southwest airlines and I must say I noticed a great improvement. They still don’t assign seats which I hate, but the flight attendants are so friendly. Also, all of the snacks they gave me were vegan including the little crackers shaped like airplanes that made me smile every time I ate one. I brought along a pair of socks to work on while on the plane. I started a pair of Jaywalkers (yes, I am the last knitter in the world to try out this pattern) in some candy corn yarn. I had a few problems in the beginning because I always make socks using four needles, even when the pattern calls for five. The Jaywalkers need to be worked on five. After about two inches of struggling with the stitches I added the extra needle and that made all the difference in the world.

On my way out of the house, I grabbed the mail which contained a postcard from my secret pal! I always forget that in addition to getting to spoil someone for three months that I get fun stuff too! In my frantic packing rush this morning, I forgot to bring along the first package for my secret pal. There were a couple of items that I wanted to get on my trip before mailing it, including a few things I picked up today. I guess that I will just need to mail it when I return. I did get her a couple post cards so that she will at least be getting something within the next two weeks. When I return she will be getting a rockin’ package, I can’t wait!!!
at 7:55 PM

Wow, that burrito is huge! And you're not the last to make the jaywalkers -- I just received my yarn for them (more greenwood cotton/lycra hand-dyed). Candycorn yarn? Should I know what that is or am I too tired to be reading blogs?

Another Jaywalker virgin! I really like the pattern and as long as you stick to the five needle requirement you will be really happy.

The yarn has no brand name, it is my own. The colors are candy corn colors so that is why I call it candycorn yarn. I will post a picture tonight.

i paid the price for eating the super burrito. good thing you weren't home:)

your own= you dyed it? or spun it? it's really so lovely BUT i'm still confused.

and hahahah! to what punchy said!!!

I dyed it, but it would have been cool if I could spin that well. Maybe some day.

deets -- what yarn did you dye on top of and what kinds of dyes?? i've been really wanting to dye yarns and was wondering what works and what doesn't. i love those colors! my jaywalker is not really striping. i'll post a picture later, i think.