New technology and a little knitting

Philip and I got a DVR yesterday and I am completely obsessed with it. We have been thinking about doing this since one of our friends got a Tivo a few years ago, but we never really had a good excuse to actually go out and buy this sort of thing. Right before our anniversary this year, Philip and I were talking about gifts and we came up with the idea that we would get one big gift that both of us could enjoy. We went back and forth about several ideas and then Philip proposed the DVR and we knew that was the one. We sat on the idea for a few weeks and finally, when I called to pay the cable bill I asked them to add it to our service. Four days later and we have a fancy box that records all of the TV that we want to watch. We set it up last night to record a couple of series and movies that we won't be around to watch. Just think, I never have to be home on a Tuesday night to watch the Gilmore Girls again. Of course I can already tell that finding time to watch all of the stuff we record is going to be a whole other problem, but at least when I want to veg out and watch tv, there will be something good to watch.

On the knitting front, the store samples have really taken away a lot of my knitting time, but I did buy some Euroflax to make the handtowel from Mason Dixon Knitting. This is not a quick knit, but I love working with the linen yarn and it is a great project to pick up when I need a break. Also, I have done several samples for the store, but my favorite is the pattern from Subversive Cross Stitch. I am not really a big fan of cross stitching, but I do really like the final project of this pattern. I am going to do another one of these for our cheesey bathroom. 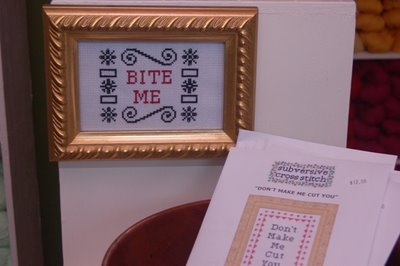 There is one more exciting project I am working on, but I will post about it next week when it is official.
at 7:59 AM

Sample making does sound like a ton of work! I love subversive cross stitch! Thanks for reminding me to pick mine up again -- it's almost done!

Coolness about the dvr! We don't have one, but my the tv tuner card on my mac is tivo like, have only known it for under a month and I couldn't live without it. :)

I love your cross stitch! Gotta check out that link.

Do the posters have anything to do with this secret project, R-Dub?

Uh-oh. DVR. We will never see you again. Have fun! Call me when your ass fuses to the couch, I'll help peel you off! ;)

The posters probably have something to do with this secret project, you'll just have to wait and see.

I don't think the DVR is going to keep me home at nights, in fact that was why I got it. I am addicted to two TV shows that I really hate to miss so during the regular seasons I stay home on those nights. I have already programmed the DVR to record all of the new episodes so I am no longer forced to stay in on Tuesdays and Thursdays. It is a whole new freedom!

that sampler is Awesome!