My weekend in Nashville

Since I had an extra day off this weekend due to the holiday I decided to take a trip down to Nashville to visit my friend Nieves who I don't see nearly enough. Nieves the only roommate who got as excited about decorating a space as I did. Philip is okay; he gets excited when I pull everything together, but the actual process kinda bores him. We spent a lot of the weekend crafting. She was working on her stuff for the Revolution of Craft in two weeks which will be her very first craft fair. Her stuff is incredable, she makes these amazing glittery shrines which are the focus of her booth, but she also has some super cute bags and pins made from old sweaters. I can't wait to see all of her finished stuff at the fair. While she was working on her stuff, I finished up my first socks of the new year. 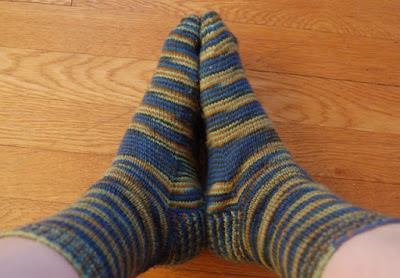 This is a pretty bad picture, but it gives you the basic idea. The yarn isn't self-striping, it is a variegated yarn that made spirals on the socks.

On Monday, we decided to go to the Country Music Hall of Fame since she gets free guest passes through work (free is the only way I could afford to go.) I am not a big fan of country music, but I love the traditional country that my dad listened to as a kid and I love cowboys. The museum had way to many guitars for my taste which is to be expected in a place devoted to preserving a musical history. My favorite part of the museum was all of the clothing worn by mid-century country musicians. They had several suits embellished to the point of over-embellishment. Just to look at these suits and realize that all of the stitchings and rhinestone work was done by hand is just amazing. I also saw the Hee-Haw corn field which wasn't bad either.

After the Hall of Fame we headed over to Hatch Show Print where Nieves works. For those of you who don't know, Hatch is a letterpress in Nashville that has been running since 1879 and is most famous for its concert prints or to the knitting world for the cover of Mason Dixon Knitting. The place was huge, way larger than I had imagined and all of the walls were covered with shelves and drawers of print blocks and poster from the beginning to the present. I can't believe how lucky she is to go to work there everyday. 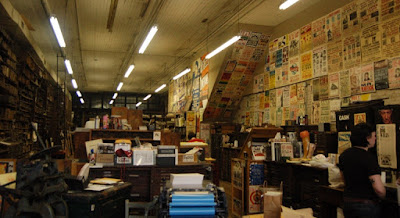 Here is the view of Hatch from the very front. 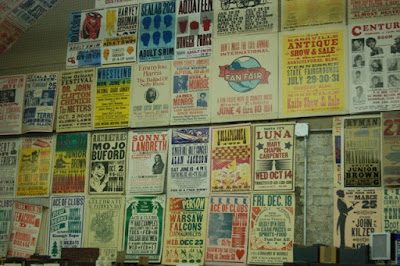 Some of the various posters printed by Hatch over the years.

Hatch is an operating museum so you can go there and see the designers and printers in action and buy some of their vintage prints. If my life ever slows down I would like to take a week and intern there- you can add that to my 40 before 40.
at 9:24 PM

Robyn, your socks turned out gorgeous! :)