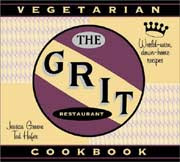 This was a busy busy weekend. First, I received a final package from my SP which contained a cookbook from the Grit Restaurant in Athens, Georgia. Vegetarian Southern cooking is my favorite so I am really excited to try some of the recipes in here. I was a little sad that only one of the brunch recipes were vegan, but the others should be pretty easy to convert. Overall, I would say half of the book is vegan with all of the vegan recipes marked with a "v" (though I did find a few vegan recipes that didn't have a "v" so it is possible there are more.) I also found it a little odd that a Southern Restaurant called the Grit didn't include grits, my all-time favorite breakfast, in its cookbook.

On Friday night, Sarabeth came over to my house to have a sewing night since I refused to go out in the cold. She brought over doll patterns from Wee Wonderfuls that she wanted to make for her two sons. We each worked on one doll until we were too tired to go any further. She is coming over again tonight so we can finish up the dolls so I should have pictures to post tomorrow.

I finished the AntiCraft project and I am a little relieved to have it out of my life, now I am just doing mindless sock knitting and knitting little things that use up my scrap yarns. I have become obsessed with making little flowers with my extra scraps, I made about 15 flowers this weekend in my downtime. Here is my first finished flower broach. 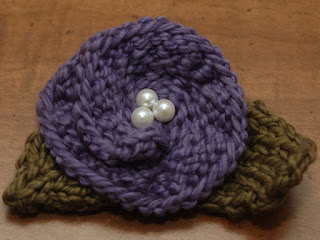 The flower and leaves are knitted from some Blue Sky Cotton leftover from Christmas gifts and the little plastic pearls are buttons I found in my button box. I think I am going to make some broaches with the leaves and some without since I only have a little green yarn left and buying more green to use up my scraps would defeat the purpose of the project.
at 8:26 AM

The flower brooch is very pretty - now i'm ready to go and see what this anticraft issue has to offer!