Not all of the time, but certainly on Sundays and Mondays. Sarah and I went up to Columbus on Sunday for the TNNA trade show and since my favorite thing to do in a new city is try out the vegan offerings I came with a list. The two main veg restaurants that we tried to eat at, the Dragonfly and the Whole World Pizza & Bakery were closed when we showed up. Then, we decided to try some Ethiopian offerings, but on Sunday the Ethiopian restaurant was closed for a graduation and on Monday it was just closed (even though it was supposed to be open.) We did get some sweet goodies from the Patty Cake vegan bakery. I got a cookie and a muffin, a bar, and a bottle of their fermented green tea drink which were all very good. I highly recommend the vegan tollhouse cookie; it was the best chocolate chip cookie I have ever had. 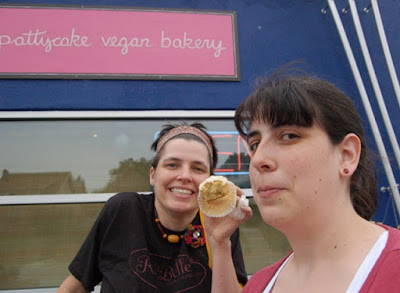 For dinner Sunday night we checked out Aladdin's Eatery which is a local favorite with the vegetarians and vegans. It was a Mediterranean restaurant with very beautiful cakes in the dessert case (though I am pretty sure that none of them were vegan.) The menu had a decent selection of items we could eat which was nice. Since I had only eaten pastries, I was craving something heavier, preferably with beans so I decided on the falafel wrap with hummus. It was brought out like a to-go order (all wrapped up) that was just thrown on a plate. The falafel was very dry and had a horrible aftertaste. I tried to just eat it with more hummus, but that didn't really work. I am not sure why this restaurant received such good reviews, the food was mediocre at best and the waitress was really rude. On Monday, after two failed attempts at finding good food we just settled for burritos; they never disappoint.

In our desperate search for food we stumbled upon Wholly Craft, an indie craft shop. Everything in the shop was handmade or used for making stuff. They have stuff from crafters from all over the country and lots of one-of-a-kind goodness. If you are in or around the Columbus area you have to check this place out. They will be moving to the space next door so there will be even more craftabulousness in the near future. 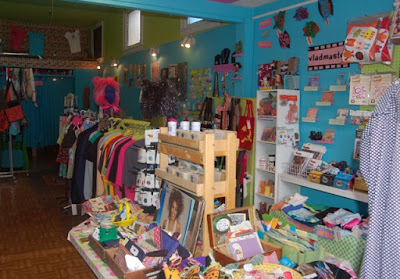 On our way out of town we had to get a picture of this advertisement for auto insurance. I am a big fan of fun marketing schemes. This was just an ordinary city parking lot and I guess that they were renting part of it to place the vehicles covered in paint. The really funny thing about this ad was that the parking lot was completely packed, except for the area with the paint. It was almost as if people thought the paint was going to come down on their cars. I admire the driver of the red car for taking a chance.

TNNA was great too; we saw lots of new patterns and yarns and found a new line of hemp that we are adding to the store as well as some exciting changes with our current hemp provider. We met Jenny Hart and saw the additions to her line, and much more. We have lots of exciting things coming to the store over the next several months.

The TNNA summer show is going to be in Columbus again next year so we will go back to our favorites and hopefully have an easier time finding new stuff to try. We will go up on Saturday to assure a meal at the Dragonfly.
at 9:14 AM

Sounds like a good time. Can't wait to see what's coming to the store!

What a great trip! and what a COOL craft store!!!

That spilled paint ad is freaking awesome. I'm glad you got pics, too cool.