When Philip and I lived in Norfolk, our favorite restaurant was an Italian place up the street from our apartment called Amalfi Ristorante Italiano. Almalfi's isn't like your typical Italian restaurant that only offers pasta with a marinara sauce for the vegans, they have a vegan menu including spaghetti with meatballs, vegan calamari, soy cheese pizza, vegan chicken dishes, and vegan cheesecakes.

The first time we went to Almalfi's, I ordered the Rigatoni alla Battista, a rigatoni pasta with an incredibly creamy tomato sauce, and it is still my favorite dish they serve. I have tried to make a similar sauce, but I could never seem to emulate the creaminess of the dish at home, until now. Last week a vegan tomato cream sauce recipe was posted on the Vegan Yum Yum blog and I found the ingredient that I had been missing, tofutti cream cheese. Of course, thick and creamy, the toffuti was exactly what my sauce was missing.

With the recipe in hand, a few pounds of organic tomatoes from my dad's garden, and some fresh basil I was ready to try again. 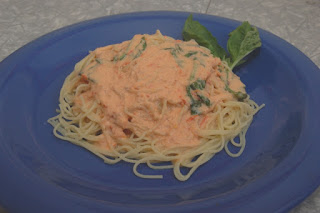 I changed the Vegan Yum Yum recipe a bit by adding more tomatoes and I blended them a little less to create a chunkier sauce. I also added fresh basil and cracked pepper. Next time we make the sauce we are going to cook the tomatoes into a tomato sauce before adding the Tofutti; I think this will make the sauce creamier.
at 3:17 PM