Friday night we had our last (knock on wood) winter storm resulting in about 4 inches of snow. Since the roads were still fairly drivable, Sarah and I opened the store. A few hours later we determined that our customers were planning stay inside all day so we closed the store around 3pm to go sledding instead. Philip and I went to my dad's house to borrow his fancy toboggan that never gets used, but unfortunately it was way too big to fit inside our car. We then went to his parents' house to borrow a smaller sled. While we were doing all of this, everyone decided to go to Castlewood park instead of Shilito Park. When we arrived at the park we were a little disappointed at the size of the hill, but we quickly realized that a small empty hill is way better than an overcrowded large one (plus, Philip and I later agreed that we are way too old to be hiking up a huge hill pulling a sled.) There were 10 of us sharing 3 sleds which worked out surprisingly well, we never had to wait too long for a turn. After sledding, we stripped off our snow clothes and went out to dinner at Planet Thai which is always delicious. I think that vegan tom ka soup might be better than hot cocoa after an afternoon of sledding.

After dinner, Philip and I came home and watch hours of home movies that we stole from our parents' houses earlier in the day. Philip's movies were way better than mine since most of mine were videos of performances (although my fifth grade play was kinda fun.) It ends up that my sister snatched all of the candid home movies from my dad's house so we are going to have another viewing once she sends those my way. We watched home movies until about 4am at which time I collapsed into bed and slept until 1pm on Sunday.

Sunday was the Tin Man so Philip made a big pot of chili (quite possibly his best batch yet) and we sat in front of the TV for six hours straight. I really enjoyed the series, but it was a little hard to watch straight through. I am not a huge fan of modern sci-fi so some of the elements of the story seemed pretty cheezy, but all and all it was fun. I chose to knit a sock through the series. After about 3" of the sock I decided I wanted the gauge to be tighter so I ripped the whole thing out and started over. I am really glad I did because changing the gauge also changed the striping pattern and took away the spiraling effect. 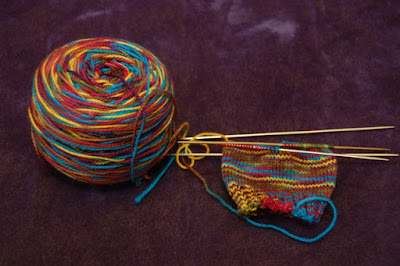 Here's my progress. The yarn is one of the Tempted hand dyes that I got for Christmas. The colorway is called Fiesta and appropriately so since there are about a million colors in this ball.
at 8:46 AM

I don't know if it still a good spot, but we always used to go sledding at Stonewall Elementary school. It had a huge hill off to the right of the school when you enter the front parking lot. Only downside is, you have to be aware of the creek at the bottom. :D