I did a little finishing this weekend and I am feeling pretty good.

First is the kid version of the Guimauve hat from Going Straight. I used worsted weight yarn on US5 needles. I made the hat smaller by casting on 44 stitches and only doing 8 pattern repeats. I decided against the tassel so this is the finished hat. Obviously I don't have a kid to model this hat so Paws, Philip's childhood pal, was gracious enough to pose for a few shots. 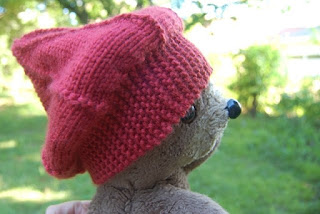 Second is the Marley hat from Knit on the Net. I used a worsted hand dye from my stash for this one and I am really happy with the final product. Unfortunately, it is no longer hat weather here so I will save it for the fall. Other than going down a needle size to knit the hat, I followed the pattern exactly (a rarity for me.) 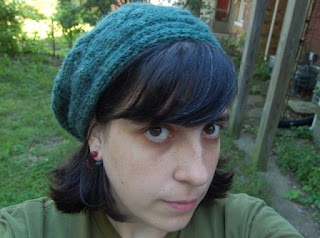 Finally, I have some cute new flower pots for my herb garden. I found some organic seeds on clearance at Target before I left for Virginia which I grabbed and saved for my return. Monday, I bought a few terra cotta pots to replace the ones I broke and I painted them to match the kitchen and the other pots. Meanwhile, I put a few of the seeds in a wet paper towel in the closet to sprout. I know that the seeds can sprout inside the pots, but I tend to be more successful at growing things when I know how many plants are going to come up. 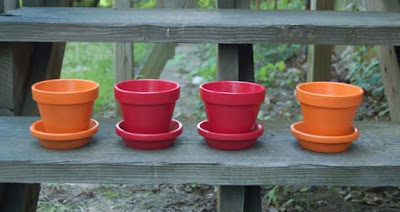 In addition to all of the finishing, Philip and I went to see the Ironman movie and spent hours sitting out in the backyard and playing with the dogs. It was a great weekend!
at 6:25 PM