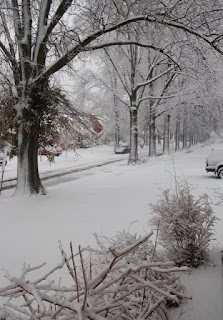 Today is a snowday (well, ice day) in the bluegrass. The ice started yesterday with freezing rains that just kept coming. By this morning, all the bushes and trees were so weighed down with the ice that limbs were snapping off left and right. I took Astrid out for a walk around 8am and a giant limb fell 3ft behind us and several others fell up the street within the short time we were outside. After that I decided that Astrid will have to just use the side yard today where there aren't any trees to attack us.

Since the University is closed today I decided we should also close the shop. This is the first time that we have closed a full day due to weather, but my guess is that the building is almost inaccessible due to the ice. 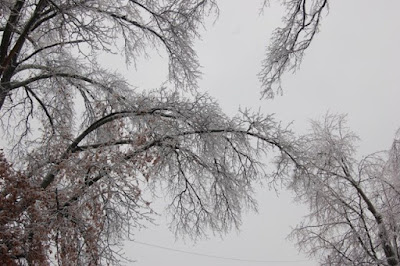 Above are the trees in front of our house. The branches and limbs are slowly bending downward toward the earth. Unfortunately, if we get too much more snow, many of these are going to snap under the weight. 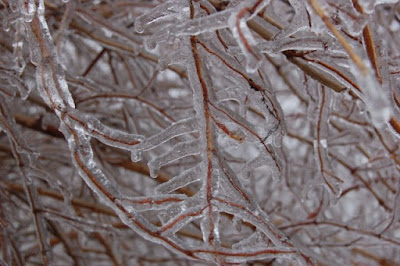 This is a close up of the bush in front of our porch. I understand that ice is extremely destructive, but I can't help loving the way it forms around tiny twigs and blades of grass. It kinda stops time or at least slows it down.

The plus side to the bad weather is that it makes me stir crazy which makes me super productive around the house. This morning I finished two writing projects, dissected and snaked our bathroom drain which has been slow for several weeks, cleaned the kitchen, read a bit, and cooked up some vegan shumai for lunch. 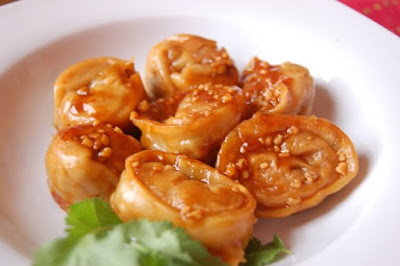 The shumai is a recipe that I found on the Everyday Dish site and I was meaning to make it for Chinese New Year. I had all of the ingredients ready to go on Monday, but that was the day that Your Vegan Mom published the recipe for vegan macaroni and cheese bites which Philip and I just had to have that night so we nixed the Chinese New Year plans. I didn't take a picture, but the mac n' cheese bites looked just like the ones on her site so you can go there and check them out. Now back to the shumai. They were really easy to prepare, but very time consuming. One recipe probably makes around 80 shumai, but I just bought one thing of dumpling wrappers so 50 is what we got. I only cooked up the ones we could eat and I froze the rest of them (dumplings don't do well in the refrigerator) for use at a later date. Since I didn't photograph them last night I decided to cook up some of the frozen ones for lunch today. I was a little worried about how they would do after being frozen, but they were actually easier to cook in the frozen state and tasted as good as they did last night. My favorite thing about the recipe was the bulger wheat and the great flavor and texture it brings to the filling. I have never cooked bulger before and I never realized how versitile it is. I will definitely be stocking up on my next trip to the co-op.
at 12:50 PM

Ooh, I have to try this recipe! Thanks for the tip. They look wonderful, and I love the bulgar idea.

I wish I could find wonton wrappers here in the bush :( Sorry about your ice and snow. It's pretty cold here. -10 again.

Thank you for the shipment of yarn, I love it. I've been petting them for days now.

Seriously. I'm a whore for any food wrapped in dough and then boiled/steamed/fried/baked. Except fruit pies.