Merkins and other triangular things

The new issue of the Anticraft went up today and the theme is merkins! I have two merkin designs in this issue- Miss Mary Merkin and Be Prepared as well as two reviews and you can probably tell that Philip did the cover art for the issue. 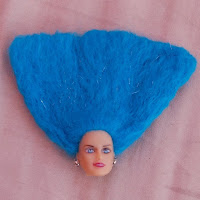 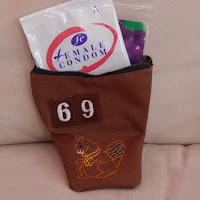 I also finished the Flower Basket Shawl that I started over a year ago. It's not that this was a difficult pattern,

I just had needle issues that really slowed me down. Actually, I recommend this pattern for any first time lace knitters; the directions were clear and easy to follow and the shawl can be made with any weight of yarn you choose. My version is the shawlette made with 1 skein of Malabrigo lace. I actually strayed from the pattern

a bit by knitting it on a smaller gauge with more repeats. I was three yards short of finishing, but luckily I own a yarn shop and so I stole three yards from a skein (in a slightly different color) to finish the shawl (for those interested, the skein in question is marked down on the clearance shelf.) This is probably going to be my last project on lace weight yarn. I love the way the shawl looks, but it is way to light and dainty for my tastes. From now on, all lace shawls will be fingering or higher.

Now for my needle issues. I started the shawl on a pair of Addi Turbos, but they really weren't sharp enough to work the lace pattern with a lace weight yarn (had I used fingering weight this wouldn't have been an issue.) This was around the time when the Addi Lace needles came out so I decided to get a set of them in the size I needed. The Addi Lace offered the points I needed, but they came with a whole new set of problems. First, the Addi Lace are slower than the turbos. This is supposed to be a selling point since they offer more control over your stitches. Unfortunately, I didn't want or need that kind of control so the drag was an annoyance for me. The second problem I had with the lace needles (which has since been fixed by the company) is that I was one of the people who's hands had a chemical reaction with the brass needles causing the coating to wear off and the needles to start corroding and smelling really bad.

The weird smell was the breaking point for me so I switched needles again, this time to the Knit Picks Options which were supposedly what I needed, fast pointy needles. My needles took over 2 months to get to me due to USPS issues. When they finally arrived I put them together and transfered my stitches to the new needles and continued the shawl. Maybe because I had heard such good things and maybe because I had built them up so much, but I was really disappointed with the Options needles. I liked the speed and the sharp tips, but they came with a whole new set of issues. First, they felt cheap. It might be because I am so used to knitting with Addis, but I could really feel the difference in the quality. Second, the holes used for tightening the cords slightly snagged on the lace weight yarn which slowed down my knitting a bit (and one of the cords has a hole that was slightly off center which made it snag even more leaving that cord completely unusable.)

I'm glad to hear your impressions about the KnitPicks Options needles, as I've been hemming and hawing about getting a set. Someone at my knitting group today said hers keep coming apart and she doesn't like them, so I'm still on the fence about them. Ah well.

As with any needles, I suggest you try them for yourself. The one thing I have learned working with knitters is that needles are a very personal thing. I am of the belief that there is no needle that will make every knitter happy, but there is so much variety out there if you keep trying different needles there will be a perfect needle for you.