I came up with this cozy idea a few weeks ago when the cold weather really started to set in. I love the idea of portable heat sources that use little energy and allow me to roam freely around my cold house (I generally keep the thermostat at 60 degrees all winter.) The owl cable came from an old Leisure Arts vest pattern I was given a few years ago. This cozy will dress up any standard 2 liter hot water bottle and it will keep it warmer longer. 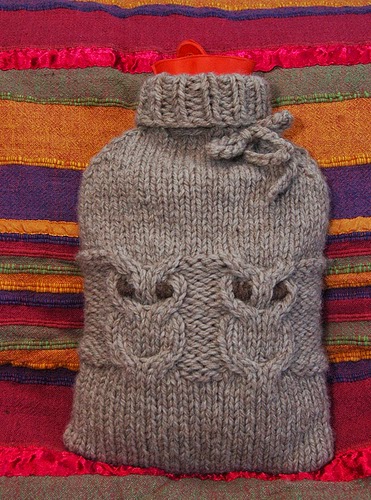 Tie
Using the crochet hook, create a 21" crochet chain and weave it through the eyelets at the base of the neck.

Eyes
With the darker yarn and the tapestry needle, embroider over the purl stitches that make up each owl's eyes using the satin stitch.

*While the figure 8 cast-on is ideal for this project, if you feel uncomfortable using it you can CO 52 stitches onto 4 dpns and join for knitting in the round. Then, at the end of your
project you can simply seam the bottom of your cozy.

To use- Slide water bottle into cozy, secure with tie, and fill with hot water.
at 9:00 AM

Thanks for posting the pattern. I have that Leisure Arts vest pattern....I made my children the vests when they were little, and now that they're grown I can make them hot water bottle cozies.

Sarah actually found it when she was placing an order for medical supplies.

Oh my what a lovely idea...other the the hot water the woolen cover is also going to keep the body cozy and warm.Love the design too...

I just made this for my dad for fathers day. It's a great pattern-knitted up really nicely, thanks!

I absolutely LOVE this pattern! I just wanted to let you know that I have linked to it here: http://www.allfreeknitting.com/Miscellaneous/hoot-water-bottle-cozy

Please feel free to send us more patterns, or let us know if you prefer us not to link to you. We also use projects in our newsletters.

Etobicoke,Ontario,Canada
Dec.28/10
I own/operate my own cleaning business & have many senior clients that use a hot water bottle! These will be in their "next years" Christmas stocking! Brilliant idea from you, thank you!(Guess I should get "busy" right away!..lolol)
CasClean

I need cold more than hot -- so I might consider doing this cutie for my ice pack!!

Molly and McGee would approve this message. ;-)

Give a hoot,
Marny

Just a question - I notice the "Pattern Note" says to knit this pattern holding two strands of wool throughout. Can you explain this? Do I need to use two balls of yarn at the same time - that seems like it would be very thick...

Folks, did you use two strands of yarn to make this? The woman at my local knitting store recommended that I don't do that - that it will be too thick. I'm wondering if the two strands mean two ply, which my yarn is already. I am using Eco Super Alpaca yarn.

Yes, it was done with two strands of Eco Wool (aran weight) held together.

Hi, I have just finished knitting this. It looks great. But ai am trying to work out how to fit the hot water bottle into the cover. Is it somehow supposed to fit inthrough the small hole which is the neck?