It's now officially hat season which means I start my annual hat knit-a-thon. Basically the way this works is every time there is a break in my knitting or a yarn catches my eye, I knit a hat. I have three hat boxes filled to the brim with knitted hats (and several others just stashed here and there.) The last time I took an official count was in college, at that point I had around 60 hats. I have since purged several of those hats, but they have been replaced several times over so I think it is best if I avoid any kind of formal count since I am not ready to part with any at this moment.

A couple of weeks ago we received our first fall shipment of Malabrigo which included their new Rios yarn. For those of you who haven't seen it yet, Rios is a 4-ply superwash worsted-weight yarn that is, get this, softer than their original worsted. The colors are exactly what you would expect from Malabrigo, but since the yarn base is superwash, the colors are richer and more saturated than their other yarns. In one word, this yarn is AMAZING!! Around the time of the Malabrigo shipment, the new knitty was released and naturally the Brambles beret caught my eye. Originally, I had planned on knitting Brambles out of a single-ply, I love the way cables pop in a single, but somehow I got the idea of knitting it in Rios in my head and I couldn't get it out. All of the colors we ordered were in my personal color palette so instead of antagonizing over picking the right color I went with the color we had most of- Sunset. 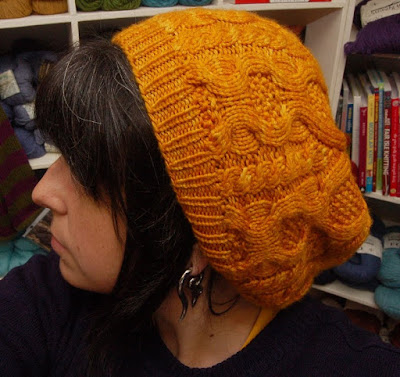 The pattern itself was very well written and the progression was logical (obviously written by a math person) and for the first time in quite a while I didn't feel the need to make any changes to the original. I loved this pattern and will likely knit another one in a different size later in the season.
at 1:55 PM

I haven't gotten a chance to handle any of the Rios yet, but it's definitely on my to-do list! The hat turned out really pretty. I have a lot of knitted hats too, and always seem to knit several during the beginning of fall.