To celebrate ReBelle's 6th anniversary as well as our move to the southside, Sarah and I dyed up several skeins of anniversary yarn which will only be available in the shop today. I also created this simple slouch hat to accompany the yarn with slipped stitches in the back to accentuate the slouch. 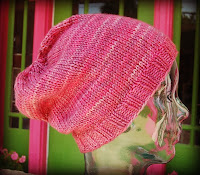 Yarn: 1 Skein ReBelle Anniversary Yarn (or 100g of worsted weight yarn)
Needles: 16” US6 and US9 circular needles, US9 dpns

Super cute! Thanks for sharing the pattern!

~Have a lovely day!

I work with AllFreeKnitting and have been trying to contact you. Please email me if there is a good way to reach you. Thanks!

I think I am not doing something right with the W3-slip 3. Do you have a close-up photo because mine isn't looking like yours?!

The second image on the Ravelry project page is an up-close of the stitch. Hope that helps. http://www.ravelry.com/projects/spingirl/the-southside-slouch