A few months ago, Dianne from Tanglewood Farm mentioned that she was bringing Dagmar Klos, writer of the Dyer's Companion, to her farm to do a workshop on natural dyeing. At the time, I was more interested in sharing the information with my customers who wanted to learn about plant dyes, I had no personal interest in learning what I believed to be such a restrictive method of dyeing. When the workshop was all set up and Dianne sent me the pricing and information on the three-day event- around $200 for three full days of instruction, meals, and 75 mini-skeins of dyed yarn to take home, I couldn't resist signing myself up before passing the information along to my customers (and good thing, the workshop filled fast and ended up with a pretty long waiting list.) 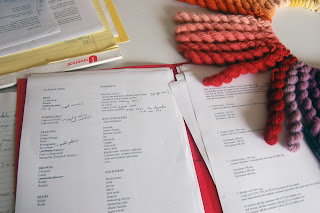 Thursday was the first day of the workshop. We spent the first half of the day in lecture learning about the history of natural dyeing, the materials we were going to use, the different ways of extracting the colors, methods for attaching them to various fibers, the variables that would effect our results, safety guidelines, and resources for further research (being a bit of a bibliophile, I was especially appreciative of the comprehensive bibliography included in our class materials.) Dagmar also pulled out her color wheel of natural dyes and instantly removed any doubt I had about this workshop. In the past when I have looked at natural dyeing methods, the colors always seemed way too dull for my needs. Lots of yellows and browns with lightly saturated versions of other colors, none of which appealed to me. The few brighter, more saturated colors I had seen were achieved using heavy metal mordants which are completely out of the question for me, I would much rather use synthetic dyes that are less damaging to the environment. The colors Dagmar achieved created a full spectrum of tone and hue and without using the heavy metal mordants that I wanted to avoid. Mind blown. 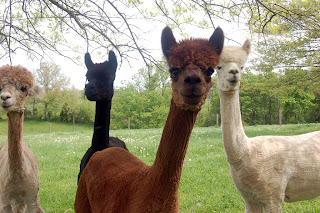 We took a break for lunch and I used this chance to hang out with the cutest gang of alpacas that I have ever seen. After I got my fill of cuteness, I joined the others in the house for lunch. Due to my weird dietary needs, I didn't really expect too much from the meals, which was fine. I got to the kitchen and there was a beautiful spread of fresh veggies and some tomato celery soup from Shaker Town that was among the best soup I have ever had. (The recipe is in their cookbook which I ordered from the library, I plan to make vats and vats of the stuff in the not so distant future.) 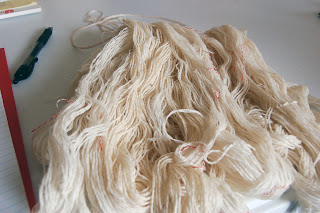 After lunch it was back to the studio to sort and bundle the skeins of undyed yarn. There were 12 participants and 75 different colors with 8 color roots so we had to sort 900 mini-skeins into initial groupings of 36 and then the groupings of 36 into groups of 3- it took awhile. After that was finished, we did some math to figure our mordant measurements and then we moved out to the barn to start scouring and mordanting. In the barn, we teamed up and each two person team chose a dye matter to work with. My partner in crime was my friend Chris who yelled out cochineal with the joy and enthusiasm of a five-year-old so thus began our adventures with beetles.
at 3:32 PM